I was going to review the Lego Hobbit set, An Unexpected Gathering (79003) much earlier than this but as the reviews started rolling in from various Lego blogs, all praising its virtues and declaring it one of the best sets ever made, I realised there was not too much I could add.

Quite simply, this set is perfect ()

Furthermore, if you are remotely interested in The Lord Of the Rings or The Hobbit you need to have at least one this set, and possibly more in order to make Lego dioramas of The Shire. 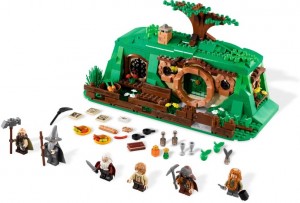 I could go through every design-gem this set contains (and there are a number!) but I feel most of it has already been covered by Brickset, The Brothers Brick and just about every other Lego Blog.

Instead, let me point out a few things that I noticed once the set was assembled and staring at me in all its glorious detail:

In fact the only way this set could have been improved is by doing away with the stickers. I’m sure, with the amount of new figures in the set, financial corners had to be cut somewhere but it just detracts from the set to have to affix stickers, knowing they will deteriorate sooner than printed pieces.

Still, that minor irk aside, An Unexpected Gathering (79003) gets my vote for one of the Best Lego sets ever.

Update! Competition is Closed and Winners have been Notified.
Lego has offerred us two of these sets to giveaway to The Brick Life readers – See below for more details! The giveaway competition closes .

Gandalf the Grey has invited the Dwarves to Bag End the Hobbit home of Bilbo Baggins. Uncover the Hobbit hole to entertain the Dwarves with food and drink accessories! Then invite Bilbo Baggins on a great journey to The Lonely Mountain and begin the epic LEGO The Hobbit: An Unexpected Journey adventure.

Value For Money:  Good figure and piece count value for a licensed set
Play Experience: Wonderful as a playset or display diorama
Pieces & Minifigures: Stickers (bummer) aside, the set comes with highly detailed and exclusive figures and a model that will inspire kids to create their own natural environments with Lego.
Value For Kids:  Great for fans of all ages.

Win One Of Two Lego The Hobbit “An Unexpected Gathering” Sets!

Update! Competition is Closed and Winners have been Notified.

A big thank-you to everyone who entered the competition, there were about 80 in total!

The two winners were selected using tools over at RandomPicker and have been contacted by email.

Please remember to subscribe to my newsletter so I can let you know of future Lego competitions and giveaways.

Thanks again for taking the time to enter and thanks again to Lego for offering the sets, 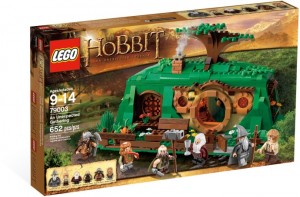 Lego has graciously offerred two Lego the Hobbit An Unexpected Gathering Sets to Australian readers of The Brick Life.

All you have to do is:

If you are stuck for something to say, try answering these questions:

One entry per person.

Two entrants will be drawn at random and will each receive one of the Lego 79003 sets, sent out to them by Lego.

Remember to leave your email address in the appropriate space above the comment box so I can contact you.

Winners will be contacted soon after.

Please contact your friends and let them know so they have a chance to win one of these great sets too!

Thanks again to Lego and One Green Bean for offerring the sets to our readers!

Lego was kind enough to send me a Lego The Hobbit Game to review.

My son and I had just been to see the film of The Hobbit and so we were pretty excited about playing the game.

Over the holidays our kids sat down and constructed the game (Lego Games come with instruction books just like sets) and then we all played The Hobbit as a family.

The Lego Hobbit Game is a memory game.

By rolling a die, players move around the various Hobbit holes on the game board.

Concealed in each Hobbit hole are two tiles, each with an image printed on them.

Once players land on a Hobbit Hole they select the top tile in that Hole and then, depending on the tile revealed, perform another task with the eventual goal of collecting the most dwarf tiles.

For example, if a player finds a Dwarf tile then they keep it and play moves on.

However if they find a Rune, Hobbit or Food tile, then they must try to find a matching tile from any other Hobbit hole on the board.

If two matching tiles are found, the player is able to perform another task which will hopefully result in a dwarf being found.

Once all ten dwarves have been found the game ends and the player with the most dwarf tiles is the winner.

Gameplay takes about 20 minutes and the game is recommended for 2-4 players 7 years and older.

A buildable and fun twist on a memory game for 2 to 4 players.

The game is all about finding the missing Dwarves who have gotten lost in Hobbiton, using hints left by Gandalf the Grey and some Hobbits to help you search. If you are up to the challenge you can transform the board during the game, testing your memory skills to the max. Once the board is built it is easy to store and quick to take out to play again.

Step One : Read the Instructions

Before I start to review the game you should know two things about me:

1. I have a terrible memory – Which means memory games are essentially a torture device for me…and

2. I tend not to read instructions as thoroughly as I should – which can lead to frustration and misunderstanding.

When we first started playing the game I was overwhelmed – moving the figures stud-by-stud across the board was taking a long time to get from one Hobbit home to another. Surely it couldn’t be this tedious?

Then I re-read the instructions. Ah, yes…

When the die is rolled players move from one hobbit hole to another, not one Lego stud at a time…speeds things up very nicely.

Guess who was responsible for reading instructions the first time… Cough, cough. 🙂

After we rectified this slight misunderstanding the game became enjoyable and, importantly,  fast paced.

Once constructed the game board has hinges on three sides so the game layout can be changed in a number of ways without actually taking the board apart.

The game board can also fit neatly back into the game box once in the square layout which is a wonderful timesaver (and storage space saver).

There are four game figures : Gandalf the Grey, Kili the dwarf, Fili the dwarf and Dwalin the dwarf.

Each figure is highly distinctive, minute and cute (I should note that after seeing the film we all wanted to be either Fili or Kili).

Also worth noting is the presence of two additional and unique tiles (Thorin and Bilbo) which can be added to the game for a variation on gameplay.

The rule book also includes a number of other suggested ways to mix up the game and, as with other Lego games, the rules of The Hobbit are open for interpretation by players and may be altered to make gameplay more simple or complex.

Value For Money:  Small Pieces but lots of printed tiles
Play Experience: Fast and varied – mix it up as desired
Pieces & Minifigures: All printed pieces (no stickers) and Mini Fili & Kili!
Value For Kids:  Great for younger fans and families

My family liked the Hobbit Game (eventually – see above note) and appreciated the different playing options which will ultimately extend it’s life in our household.

The game board is gorgeous and manages to convey the spirit of The Shire with minimal amount of pieces (just check out those Hobbit holes – ingenious!).

The figures are very cute and I have already seen a few of them wandering through my childrens’ Lego sets.

The set probably won’t appeal to older fans (as is the case with many of the Lego Games) but is recommended for families and younger fans familiar with the series.

P.S Thanks to Lego and the folks at One Green Bean for sending me the set 🙂