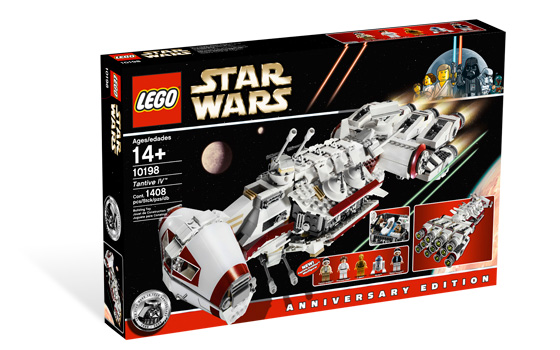 The Lego 10198 Tantive IV set, otherwise known as the Star Wars Lego Blockade Runner is one of the coolest Star Wars Lego sets if you are looking for a set to build together with an older child, particularly if you are both fans of the movies.

The set consists of one large white spaceship, known as the Tantive IV and five minifigures: Princess Leia, C-3PO, R2-D2, Captain Antilles and a Rebel Trooper.

The ship is large and impressive, iconic in the Star Wars universe as being the first ship to ever grace the screen as the original movie, A New Hope opened in 1977.

The set is a great build and though, on the box, is recommended for ages 14+ it would provide an enjoyable challenge for any experienced Lego builder over the age of 10. Lego fans have embraced this set as one of the best of the theme so far. 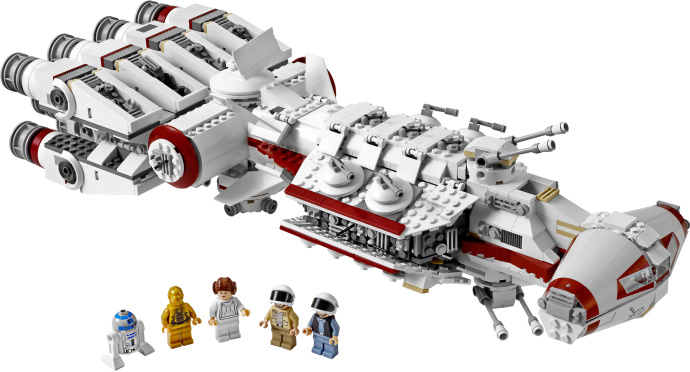 The Tantive IV is a beautiful ship and is a set my son and I built together. Although he is 10 he really required no assistance from me with the building process ( I was more on hand to provide piece sorting duties :0) )

It has a high piece count and one of the few modern sets that contains only printed parts and no stickers, even the two large pieces that make up the cockpit are printed on.

The ship contains a high degree of detail (known in the Lego world as “Greebling”) on the outside of the ship to make it seem more like an accurate representation of an actual spaceship rather than simply a play vehicle. Play features are fairly sparse though and this is more of a display model as a result.

The engines at the back are one of the highlights of the Tantive IV and so it is nice that Lego took the time to create something accurate and impressive, even in a model of this size.

Having said that, this is not a small Lego set.

The ship measures 20.5″ (52cm) long, 7.5″ (19cm) wide and 5.5″ (14cm) tall, again another reason why you would probably display this rather than zoom around the house with it precariously gripped in one hand (yes I tried it-no it wasn’t pretty).

Overall this is an expensive set but worth getting for it’s superior design, appearance and presence as a display piece. It’s iconic status, combined with the set’s lack of stickers and the amount of detail on the ship’s fuselage will ensure this is one of the most sought after ships for Star Wars Lego fans.