The vehicle, a NR-N99 Persuader-class droid enforcer, first appeared in Star Wars Episode Two: Attack Of The Clones at the Battle of Geonosis and then again in Episode Three: Revenge Of The Sith when the Corporate Alliance began to attack the Wookie homeworld of Kashyyyk.

The main appeal of this new set is the presence of the bounty hunter Jango Fett minifigure, a much sought after figure that has only appeared in one other set, Jango Fett’s Slave 1 and sells for hundreds of dollar on the secondary market.

Because of this minifigure, the set could become a popular Lego kit for collectors. 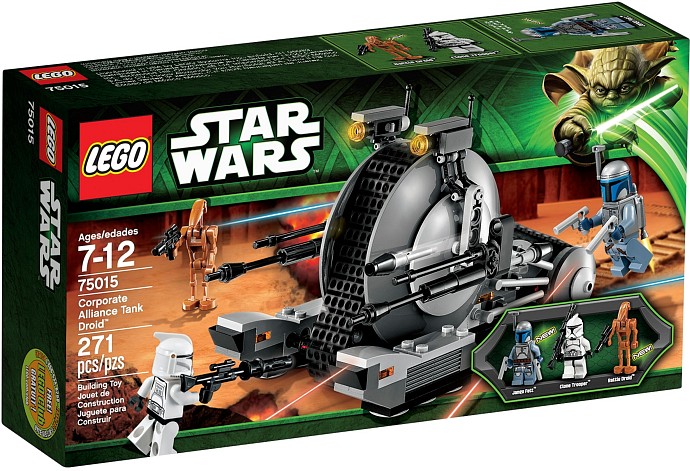 Build the great battle of Geonosis where separatist forces advancing on the Jedi Knights and their clone army with the Corporate Alliance Tank Droid  LEGO  Star Wars !Help clones to repel the overwhelming caterpillar soldiers and two missiles droid! Then pushes the battle droid and the infamous hunter Jango Fett.

• Includes 3 minifigures: A Clone Trooper, Jango Fett and a battle droid
• Includes a large caterpillar and two missiles
• Weapons include two blaster pistols, a blaster and a blaster rifle
• Tire missiles!
• Advance on all terrains and crush your enemy with large caterpillars!
• Recreate the epic battles of Star Wars : Episode II Attack of the Clones !
• Recreate a battle of Geonosis even greater with the Homing Spider Droid models 75016, 75019 and AT-TE  75021 Republic Gunship !
• Measures over 11 cm high, 18 cm long and 9 cm wide

Check out the other LEGO Star Wars Sets 2013 sets released in this wave and don’t forget to sign up to our Lego Newsletter for updates.