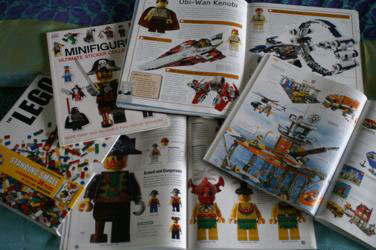 Lego Books are one way of enjoying and enhancing your love of Lego sets for those fans that simply can’t get enough of this educational construction toy.

As a parent or friend of a Lego fan or even a Lego fan yourself you know how engaging and amazing Lego bricks are.

But when Lego building stops for the day the interest remains and even though its not recommended to make Lego models in bed, you can certainly read about them, and there are more book titles on offer than simply set instructions and yearly product catalogues.

The two definitive books about Lego are from Dorling Kindersley and thankfully come as one slipcased hardcover set.

The Lego Book and Standing Tall are available online for great discountsand cover the best of Lego’s history including sets, designs and minfigures.

They really are the ultimate collector’s set and my son, who is 9, has devoured these two volumes to the point that they are dog-eared and falling apart at the seams.

Each time he invites friends over their eyes widen when they turn every page, and that is not just the kids but adults who grew up with Lego as well.

And these books are just the beginning.

Brickmaster, an official Lego fan club that is sadly only available in the US, has released a series of books that contains both instructions and pieces. These books are thankfully available worldwide.

Each book is based around a Lego theme including Pirates, Castle, Atlantis and Star Wars and contains about 100 pieces of Lego including a figure and instructions to make a variety of models using only those pieces.

You can also find Lego themed early readers for kids who are in the first stages of learning to read.

Most are City themed books like “Fire Truck To the Rescue” and “Calling All Cars” but you can also find Castle and Space themed titles while older releases can be picked up at second-hand book sites like eBay.

For my son, who would be considered a “reluctant reader” these books were one way of getting him interested in reading.

By bringing adventures similar to those he created in his own mind (and with his own bricks) onto the pages of a book he developed an increased interest in the words that accompanied each picture.

For parents who have children who seem disinterested in reading these simple and appealing books can form one part of a multi-discipline approach to reading education.

Magazines like Brickjournal are aimed at Adult Fans Of Lego (AFOLs) but will also appeal to kids due to the journal’s amazing photographs of stunning original designs.

The amount of time and thought people put into the design of the models featured in these magazines is inspiring and will get kids interested in “thinking outside the box”.

There are also compilations of earlier issues available in bookstores which make great value and constitute hours of inspiring reading.

Each year there are more and more books being released that relate to Lego, for all ages and interests.

For kids you can also find activity books such as the Ultimate Lego Sticker Books (Regular, Lego Star Wars and City themes) and a number of City or Atlantis themed puzzle books to round out after-hours Lego reading.

Older fans will enjoy three Lego Technic Idea Books by Yoshihito Isogawa which are wonderful guides to designing new creations with the more technical end of the lego spectrum.

They are more inspiring rather actual instructions so better for Lego builders with a bit more experience.

With the number of Lego Books due to increase in 2011 this is a great time to be building the ultimate Lego Library!