The Lego Castle is famous amongst Lego fans for being one of the first, truly fun fantasy oriented sets. The latest Lego Castle sets are called Lego Kingdoms. 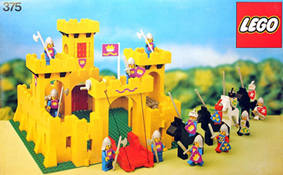 Fascination with the Lego Castle theme began back in 1978 when Lego released set 375 which is now known in Lego fan circles as the “Yellow Castle”.

It was a simple design made entirely of Lego bricks (no specialized pieces), even the horses were made of bricks, with the only new pieces being the accessories worn by the knight minifigures (helmets, shields, weapons and armor).

As someone who had that original Lego Castle set (and wished that I had kept it with the box and instructions so I could show my kids) I can say that there is nothing quite like the feeling of this medieval fantasy theme and I can entirely understand why it is still one of Lego’s most popular themes today. 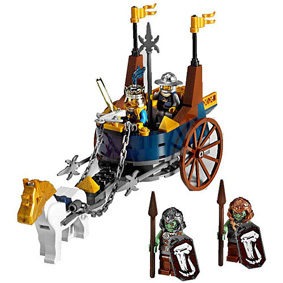 Playing with Knights and castles has been a mainstay of children’s imaginary play for centuries. Ever since the age of the crusades faded into history, children have found the era of the Middle Ages fascinating in their representation of good and evil, bravery and honor.

While much of it is based on historical accuracy, it is the mythology of Knights and what they represent which has lasted through the years and this is the aspect that children love to play with, often mixing reality with fantasy.

Children often role-play, placing themselves as the noble knight warding off enemy forces at the castle walls with swords, bow and arrow or cauldrons of melting tar.

Often the castle is connected with nature, sitting amongst endless forests full of strange and fantastical creatures or high on craggy mountain tops where wizards harness the elements to defend their keep (you can see I have an active imagination).

Role play allows kids to be the protagonist in their own stories, and the castle theme is rich with opportunities to explore different facets of good and evil and the grayness in between as well as countless exciting adventures amongst the castle walls. 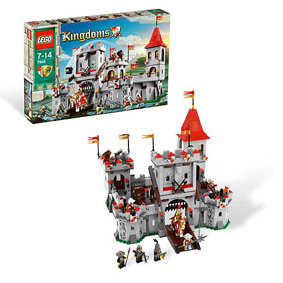 The Castle theme has come a long way since the 1970s and modern sets are more likely to have specialized pieces to make the construction quicker and the look more authentic.

Large pieces are used in the construction of the castle walls and other unique pieces might include horses or dragons that minifigures can ride, but there is still much building fun to be had as well as countless opportunities to customize (this is Lego after all!).

The latest incarnation of the Lego Castle theme for 2010-2011 is known as Lego Kingdoms and is more historically accurate than recent Castle themes that had more of a “Lord Of the Rings” fantasy feel complete with wizards, trolls, “living” skeletons and dwarves.

Moving into more traditional territory, the Lego Kingdoms theme concentrates on two warring groups of Knights and their battle for the control of the King’s castle.

You can check out our Latest reviews of Lego Castle sets on out Lego Kingdoms Page.