The Lego City Airport has been a popular subtheme of the Lego range for some years, this latest incarnation stemming back to 2006.

While earlier airports and planes were traditional Lego models, the latest versions are characterized by more accurate looking planes which achieve their look by featuring larger Lego pieces. While some traditionalists argue it takes away from the longevity and fun of Lego, the larger pieces do make certain rounded models more life-like and appealing.

A Lego city airport set generally contains a plane, control tower and/or terminal and a number of accessories including baggage and cargo vehicles, passengers and more.

Lets take a look at the latest set. 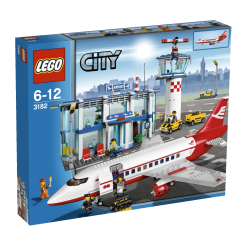 The Set At a Glance

The City Airport has many playable features, not least of which is the plane.

As mentioned previously the plane is quite life-like, for a Lego set, due to the large smooth and round pieces that join together to  make up the fuselage.

While it takes away some of the versatility of the set, because kids will be less likely to use these pieces for anything other than a plane, or at a push, a helicopter, it does make the plane quite dramatic and appealing to play with. 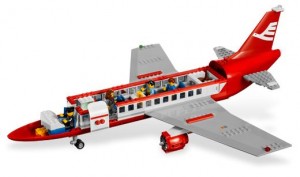 These pre-moulded pieces also make the plane lighter than it would have been if made with blocks, which is saying something because it is very big!

The Airplane measures over 20″ (50cm) long and over 7″ (17cm) tall and small hands would understandably have a hard time swooshing the plane round the house if it were made of heavier stuff.