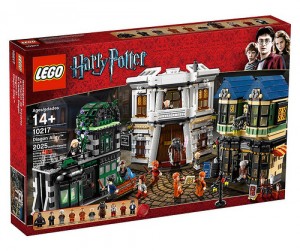 When I first heard about this set I was intrigued but the more I learnt about it the more enchanted I became.

UPDATE: It is now available at Amazon for a great price.

It is truly the best Harry Potter set Lego have done, and that is saying something! I was deeply impressed with their most recent castle (having owned all the HP castles at one stage) and also their design of The Burrow.

This Diagon Alley set however has completely blown those out of the water.

Which is an interesting move on Lego’s part in regards to timing. I was all ready to splurge on at least three of the 2010 Harry Potter wave…until I saw the photos for 10217.

Now I feel like I need to save my money for early 2011, when this large and highly details masterpiece hits stores. 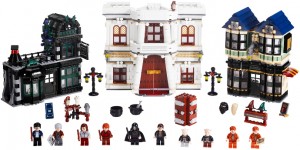 With three separate buildings, all notable in the Harry Potter lexicon, it is reminiscent of the Medieval Village Market (set 10193) and in the accompanying video it was interesting to see that the designer of Diagon Alley had a hand in that set as well.

The buildings are unique, instantly recognizable for fans and come with a number of accessories and features all of which complement the building’s place in the Harry Potter world. 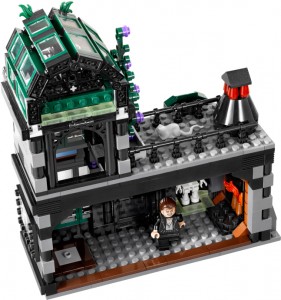 Borgin and Burkes is the dark wizarding store featured in movies two and six. In The Chamber Of Secrets Harry accidentally arrives in the fireplace of the store after mispronouncing “Diagon Alley” to the Floo Powder network in The Burrow.

In film number six, Harry Potter and The Half Blood Prince Harry, Ron and Hermione view a strange gathering of dark wizards in the store through glass windows on the ceiling (faithfully recreated in the set).

Gringotts Wizarding Bank is featured in the first and I would imagine, last of the films and the new Lego building recreates its distinctive goblin architecture with a beautiful new design style, sloping the columns astride the front door with a simple but effective new piece.

The last building is the home of Ollivander, the wand-making wizard also featured prominently in the first and last films.

There are a total of 11 minifigures in the set:

2 Gringotts goblins (not seen since the original release)

Fenrir Greyback (also seen in the Burrow set in 2010) 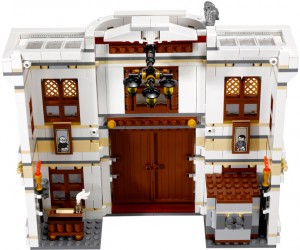 On first impressions this set is a beauty and I hope we see it arrive in stores before Christmas. This set is one to watch and will become as sought after as the Medieval Village market set in future years so put one away if you can for the secondary market!

Expand your very own wizarding world of Harry Potter™!
No need to pass through the Leaky Cauldron. Now even Muggles can shop in Diagon Alley by building this fantastically magical set that includes 3 extensively detailed buildings and 11 minifigures! Join Harry Potter, Ron Weasley and Hermione Granger as they shop for their Hogwarts school supplies. Visit Ollivanders, Borgin and Burkes, and Gringotts Bank.

Each Diagon Alley building is realistically detailed. Ollivanders offers an extensive selection of wands, storage shelves and a step ladder that allows Ollivander to gather wands from the top floor. The front desk has an “exploding” function for those inconvenient times when a spell goes awry. Borgin and Burkes includes a scary skeleton, “glow-in-the-dark” elements, a fireplace attached to the Floo Network and a Vanishing Cabinet that Dark wizards might use to sneak into Hogwarts. 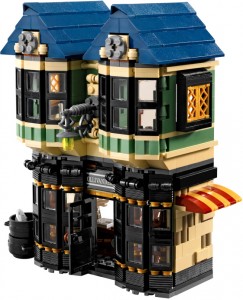 Gringotts Bank is an impressive two-story building with large double doors, and can be opened completely into one large building or closed to create one smaller building. The bank’s interior features a removable vault, along with the Philosopher’s Stone, a clerk’s desk, a chandelier and ‘wonky’ support pillars.