Dorling Kindersley (DK) and Lego have a long history, and the Lego DK books are regarded as some of the best book-based resources for Lego fans to read and learn about sets and minifigures.

Like most Dorling Kindersley books, Lego DK titles have a unique and instantly noticeable page layout. The sets and figures are photographed against a white background, making the colors and details stand out noticeably. 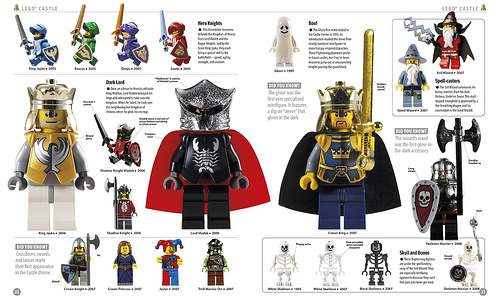 DK developed this method of photography during the 1970’s and it fits in with their description of themselves as an Illustrated Reference Publisher.

Their emphasis is on the visual and by portraying objects such as Lego sets in front of a pure white background the company highlights the object rather than the context that surrounds it.

While other companies, including Lego themselves often place Lego sets in an environment, whether it be a large City, a medieval field or a Star Wars space setting, to make the sets feel a a part of something “real”, DK removes that context, choosing instead to let the sets stand alone.

This visual style has defined Dorling Kindersley is a leader in visual reference books for adults and children (as part of their well known “Eyewitness” series) and it is something they brought to Lego in 1999.

The first series of Lego DK books were released in 1999 and became instant hits.

There is something about the clean lines and colors of Lego that seem to fit with Dorling Kindersley’s style of photographs and descriptive text.

The Ultimate Lego Book was for some years after, the definitive book about Lego for young fans of the medium.

The Ultimate Lego Book was also joined by a number of smaller paperback books which were intended to be instruction books and ideas books rather than reference guides.

These books were meant to enhance a child’s existing collection of Lego by giving them instructions to models that could be made with generic Lego bricks.

Dorling Kindersley also released a series of readers for children to develop their early reading skills in the elementary and primary years.

The series of books gave Lego minifigures names and distinct chracters, placing them in settings specific to particular Lego themes of the time (Castle, Space, City).

With the intention of encouraging kids to gain confidence in reading by themselves the stories used a limited vocabulary to bring kids in and make them want to read about their favorite minifigs.

There was very little published in the way of DK Lego books until 2009, ten years after the original books were released.

In that year it was if the floodgates had opened and the two companies decided to join together to give Lego fans exactly what they wanted. The new era began with the publication of a two volume hardcover set called simply “The Lego Book”.

Such was the success of that book , it has become the benchmark against which all Lego publications are now compared.

As well as general Lego books and readers, in this new era emphasis was placed on Star Wars Lego, a theme that has made Lego the internationally successful company it is today.

Interestingly it is the Star Wars franchise that almost brought the company to it’s knees financially when in 1999 it printed 18 million Star Wars titles, to coincide with the release of The Phantom Menace, but only sold half of them. Penguin took over the company and it has since gone from strength to strength.

These kits allowed kids to follow the instructions in the books and create a number of different models with the same bricks. Themes included Star Wars, Castle, Atlantis, City, Ninjago and more.

The Lego Book released in 2009 is actually a slipcase release of two hardcovers, one The Lego Book which covers a history of the Lego company and most of the sets and the other Standing Small which deals with the minifigures released in Lego themes over the years.

Along with the Lego Star Wars Visual Dictionary this is one of the most-read books in our house and has subsequently fallen apart from sheer overuse.

Although it does not cover every set or every figure, The Lego Book has become the definitive guide to Lego for fans who are interested in how the company has evolved over the decades.

“Reveal, explore, and celebrate the fascinating LEGO story in The LEGOBook. From its beginnings in a carpenter’s workshop and the development of the first plastic brick, to the group’s current position as an international brand, a timeline highlights key moments in LEGO history.

Fascinating facts on every significant LEGO product line, theme park, video game, artwork, competition, club, collectible and more combine with images from the LEGO Group’s photo archives-many seen here for the first time-and inspiring ideas on how to make a variety of things from just a few bricks. 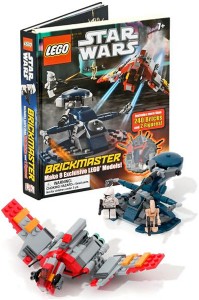 The Brickmaster kits are books of instructions on a particular Lego theme that also include a selection of blocks, pieces and minifigures that can be used to make the models in the book.

These Brickmaster kits are a great present for kids and also a way for parents to see if their child will respond to Lego.

Kits currently in print include:

This is the ultimate guide to Star Wars Lego and a must for fans.

As the parent of a Star Wars Lego fan (and a Star Wars fan myself from way-back) I can safely say this is the most well-used book in our house.

And I am not alone…

“In true DK style, LEGO Star Wars: The Visual Dictionary elucidates, illuminates, and excites even the most discerning LEGO Group, Star Wars, and minifigure fans around the world.

Darth Vader, Boba Fett, Yoda, Luke Skywalker, and more are brought to life with dozens of little-known facts and hundreds of photos, as are accessories, vehicles, weapons, and even the Death Star!

Learn about the history, manufacture, and construction of the minifigures of the Star Wars galaxy, and come away a LEGO Jedi Master.”

Another area that Dorling Kindersley have succeeded in with their emphasis on visual publishing is sticker books for children.

They have released a series of Ultimate Sticker books which have become great ways for kids to interact with Lego in a tactile way without actually playing with bricks.

These sticker books are great for cars trips and allowing kids to spread their love for Lego over all manner of surfaces including other books, the fridge, the dog and their clothing :0)

Each of the larger format Ultimate Sticker collections contain over 1000 reusable stickers.

Dorling Kindersley are committed to releasing more Lego DK books, like the Harry Potter Lego Visual Guide,  and we will update this page as more are released.

Some Other Articles About Lego Books