Lego Hoth Echo Base (Set 7879) is a part of the Lego Star Wars sub theme and features a scene from Star Wars Episode 5, The Empire Strikes Back.

The set depicts the Rebel Alliance’s secret headquarters on Ice Planet Hoth and specifically, the medical lab where Luke Skywalker recovers from an attack from a large Ice beast called a Wampa.

The set is a limited edition and only available in certain stores. The best place to purchase Lego Echo Base is online at the Official Lego Store as you also receive VIP points with the set. 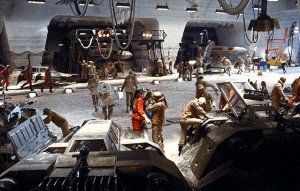 The second Star Wars film (when it was released in 1980) but now know as Episode Five, The Empire Strikes Back is the sequel to the orignal Star Wars movie released in 1977.

Often considered to be the best film of the whole series, the film opens on the Ice Planet Hoth where Luke Skywalker and his friends are hiding from the Empire.

Knowing that the harsh conditions on the remote planet will only conceal them from the pursuing forces of Darth Vader for so long, the rebels have established their temporary home, known as Echo Base in a series of ice tunnels which is defended by Ion and regular cannons.

While out on patrol Luke Skywalker and his faithful steed, a Tauntaun, are attacked by a beast known as a Wampa (think of a big, angry bear and then make it scarier!). Luke escapes from the Wampa but then wanders the Ice planet in sub-zero winds and is eventually picked up by his friend Han Solo, who brings Luke back to base for medical treatment.

The treatment takes place in the medical wing of Echo Base and involves the use of a Bacta Tank which helps Luk’e body recuperate quickly.

Right off the bat I would have to say I like this set but I should confess I am a huge Empire Strikes Back fan.

It is my favorite movie of the whole series and I could watch it over and over again without flinching at all.

When it comes to the accuracy of this set to the film, as a fan I would have preferred something bigger and more detailed but a 36 year old mother is obviously not the market Lego had in mind when they made Echo Base :0)

The Lego Hoth Echo Base set has some very “cool” (excuse the pun) minifigures.

The Luke Skywalker figure is exclusive to the set and with his distinctive Bacta-tank-detailing it would be hard to imagine the figure being in any other set than this one.

This particular styling however does limit his play to the medical bay. It would be hard to imagine kids placing him on a tauntaun to roam the frozen tundra.

The Princess Leia and Han Solo figures are also new and are nice additions to previous incarnations of these characters in Hoth atire. Both are dressed in snow-clothes ready for the freezing temperatures inside and outside the base. Leia has particularly nice detailing on her face, both sides; one is a tad angry and the other sweetly nice.

Strangely the Princess Leia figure comes with an ice block to eat which is kind of cute (I won’t question where the yellow color comes from in the ice).

The set also comes with the medical droid 2-1B, Chewbacca and two snowtroopers.

The Base and Medical Center

The playset itself is quite clever.

It is made up of two separate sides (a base side and a medical/admin side) that are joined at one end and can open out to enable access to all play areas.

Each area has details that define it immediately.

The base is functional and ready to defend the rebel forces, with turrets and ion cannons, a radar dish and entries for troops, snowspeeders and even tauntauns (who have there own little doggy-flap entrance).

Play features include a tauntaun stable with locking gate,rotating radar dishes, falling icicle trap and a working cargo crane with a nifty little hydraulic system that allows you to raise and lower the crane and gantry.

On the medical/admin side there are many details that indicate this is where all the logistics happen.

A bacta tank was a necessity for this set and it is quite cute. The rest of the medical bay includes a simple bed and places for hte medical droid 21-B to perform major surgery on rebel soldiers.

The admin area is quite basic but includes the distinctive screens featured in the film that help the rebels identify incoming bad guys.

Additional features include tauntaun that minifigures can ride, weapons and 2 snow speederbikes.

The Lego Hoth Echo Base set stands alone as a small but fun playest that would make a wonderful starting point for a larger base if kids were interested in expanding it themselves.

The minifigures are very nice and the set comes with three small vehicles (including the tauntaun) to add extra play features to the playset.

Recommended for young fans of the series.

As we mentioned earlier, as this set is an exclusive, the best place to purchase Lego Echo Base is online at the Official Lego Store where you also receive VIP points with the set.