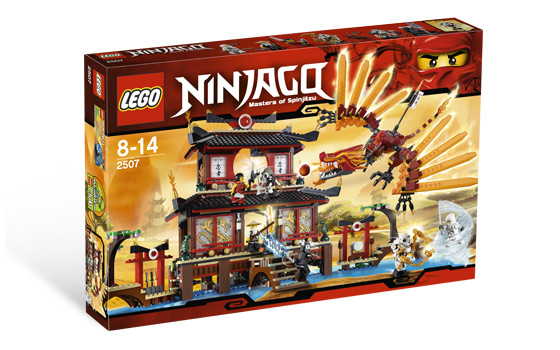 Once again Amazon.co.uk have reduced the awesome Lego Ninjago Fire Temple to a staggering 46% off the UK Recommended Retail Price!

UPDATE – The Fire Temple is out of stock but Amazon UK now have have the following deals:

The wonderful news for fans outside of the UK is that the set ships overseas.

Keep in mind that when ordering from any of the Amazon sites, shipping costs per item are reduced as you purchase more sets.

While you can order up to five of the Ninjago Fire Temple sets (and pay approximately 30 pounds for Priority shipping to Australia/Singapore/Japan for all 5!) you may not want a city full of Ninjago temples in your house!

Thankfully Amazon is also offerring discounts on a large range of other sets and even those just under UK retail are worth looking into.

My recommendation would be to ship the Fire Temple with the Pirates Of the Caribbean set The Black Pearl, as it works out to be well under retail.

You can also check out their Lego Bestseller list for more savings.

Site Update:- On another note, it is school holidays here so I am posting less (but playing with Lego more!).

But…Lego has just sent me a little giveaway for Australian readers to coincide with the National Lego Building Competition and I’ll let you know more about it in a couple of days.

In the mean time however, if I don’t get a chance to post before the weekend, Happy Easter!