I’m going to begin this review of the latest Star Wars Lego video game, Lego Star Wars 3 The Clone Wars, with a bit of background so feel free to skip down to the review if you are easily bored.

As a child I was a fan of the Star Wars original trilogy films (A New Hope, The Empire Strikes Back and Return Of the Jedi). As an adult I can appreciate both the prequel trilogy and the Clone Wars and hold no grudge against them as many of my peers do, however they are not of the same ilk as the original three.

What made the first three films so magical for me as a child and as an adult looking back, was the mythology of The Force.

Use The Force, Luke

Coming from a household where spirituality of any sort was regarded with suspicion and contempt, I yearned for some deeper meaning in my life, something to tell me that there was more to me than just what I saw. Then, one day in a dark theater, I journeyed with Luke Skywalker to Dagobah and met Yoda, the Jedi Master, who told me (well he told Luke but I was listening as well) that “Luminous beings are we, not this crude matter”.

Whenever I picture that scene with Yoda, I get all teary-eyed, just like I do when Kermit sings Rainbow Connection (but that’s a different story though the true fans out there may see the link between the two).

Both access some childlike place in me that I have not let go of. 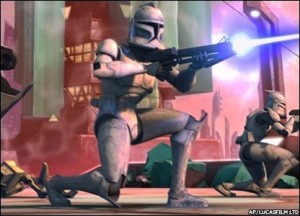 And that is where I have issues with both the prequels and especially The Clone Wars animated television series. The Force is either reduced to a scientific rationale, a Deus Ex Machina or used simply as a weapon to overpower enemies (if present at all).

My son is 10 but we started watching The Clone Wars cartoon when he was 8, both of us excited by the colorful visuals, familiar characters, exciting sound effects and the promise of great stories filled with adventure.

But after a while I had to stop watching and soon after I gave my son other viewing options, putting the Clone Wars DVDs away in the cupboard where they have sat ever since. I just couldn’t agree with him watching episode after episode of Clone Troopers packing heavy weapons and machine gunning down rows and rows of lame Battle Droids (Ha Ha…). Sure there is no blood to speak of, but as Yoda would tell you, there is more to this world than the physical, and the energy behind our actions are as meaningful as the actions we perform.

Put simply, the energy behind this series, however cute and playful, is militaristic and aggressive.

It ain’t your mommy’s Star Wars.

So if you are happy with that well then get the game, it is everything you want it to be.

If not, then simply buy something else, hopefully a Lego set that will allow your child to create and recreate their own views of the world, perhaps one that even has no guns-shock!

Having played most of the other Lego games on Gamecube, Wii, PC and ipad I have to confess I enjoyed them for the most part. There is something about bringing Lego to life within story worlds that are familiar that makes it a hard game to top.

If you are into Lego games and like the Star Wars universe (all of it) then you will enjoy this game as it doesn’t branch off too far from the games already on offer.

The Star Wars Lego 3 The Clone Wars video game covers the events in the first two seasons of The Clone Wars and, like all the other Lego video games, at it’s heart is a puzzle game with a bit of extra slashing and fighting in the mix.

You control one or more characters, usually Anakin or Obi-Wan to begin but then others later on, and wander round an environment trying try to “piece together” parts of a greater puzzle that will allow you to move to the next environment.

On the way you can collect round Lego pieces that are equivalent to points by destroying enemies or random Star-Wars-Themed-Lego furniture.

Extra elements in this new game include the ability to pilot a star ship as part of a larger space battle and a strategy component that allows you to command an invading force as it attacks a planet. You can also play in two-player mode in a split screen set up, which will avert many arguments between siblings (or married couples!)

All the while the makers of the game have infused the game with Lego and Star Wars themed humor and fun.

With the above caveat about The Clone Wars in place, this is an enjoyable game.

What Others Are Saying…

Where To Purchase Lego Star Wars 3 The Clone Wars

At The Brick Life we recommend Amazon.com for sales service, price and the FREE shipping that comes with orders over $25.

On Amazon, you can find the Star Wars Lego III The Clone Wars Games for all gaming platforms at great prices.