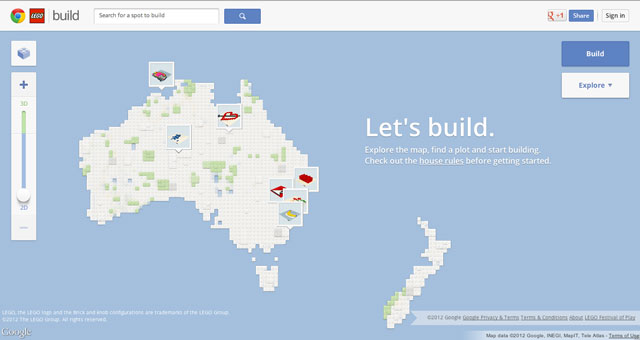 Google Build was recently launched, to coincide with the celebration of Lego’s 50 years in Australia.

It is an amazing feat of computer engineering and design and essentially allows you to build Lego creations, in 3D form, from within the Chrome Web Browser.

Check it out at Build With Chrome.

It is a lot like Lego Digital Design – with less Lego parts to use but more interactivity.

You can also combine the Google Build app with other apps like Google Maps in ingenious ways which has also lead to the rather cool ability to stake a piece of land on the Earth (or Australia and New Zealand anyway) and build a Lego model on that land.

That’s right, even if you can’t afford your own Slice of Heaven you can choose a piece of the lands Down Under, that hasn’t already been developed by another land-grabbing AFOL, and build whatever design you wish. Other countries will no doubt follow as the program develops.

Once completed, your design shows up on the Google Build map and can be seen by others.

While the Google Build program is cool, areas of user-friendliness could improve (for example you can’t edit your saved creation). But I have no doubt this aspect of Google Build will improve over time as more users interact with the system.

Build is a wonderful creative collaboration between Google and Lego and we can’t wait to see what other tricks they have up their sleeve!

We love building with LEGO bricks. We loved it as kids, and we still love it now. Visit any Google office, you’re going to see LEGO bricks all over the place.

So it’s with childish delight that today we can announce Build. Over the last few months we’ve been working with LEGO Australia, thinking about what would happen if we brought bricks to the browser. Build is the result: our latest Chrome Experiment which lets you explore and build a new world of LEGO creations together online. With 8 trillion bricks, think of Build as the largest LEGO set you’ve ever seen.

Build may look simple, but this collaborative 3D building experience would not have been possible a couple of years ago. It shows how far browser technology has come and how the web is an amazing platform for creativity. We made the bricks with WebGL, which enables powerful 3D graphics right in the browser and demonstrates the upper limit of current WebGL graphics performance.

We then mixed in Google Maps (another Aussie invention) so you can put your creation in a LEGO world alongside everyone else’s.

Right now Build is an experiment we’ve been working on in Sydney. We’re launching first in Australia and New Zealand and hope to open up in other countries soon. This year is the 50th anniversary of the LEGO brick in Australia and Build joins the celebration of the LEGO Festival of Play online.

Over the next few weeks and months we hope to see you fill the Build world up with everything from medieval castles to sea snakes, giant mouse cursors to smiling monsters and even a Kiwi! Share your creations with us on +Google and we’ll re-post the most inventive.

You can start building at buildwithchrome.com.