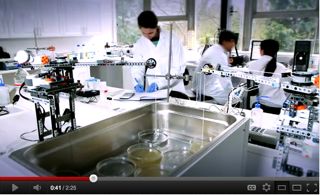 Lego Education is a big part of the company’s appeal to parents and schools.

Lego has been partnering with educators for a decade or so, using the humble bricks to teach subjects like robotics and mechanics in a practical and visual way.

While Lego has a whole educational branch of sets and products you can purchase, educators themselves have taken up the pedagogical challenge of the brick and developed their own Lego based exercises to help students grasp concepts that may otherwise be confusing in a purely theoretical approach.

One such school, the School of Physics and Astronomy at the University of London has put together booklets on particle physics, radiation and radioactivity, all represented using Lego bricks.

There is a particularly fascinating poster demonstrating the growth of the Universe, from it’s creation as a jumble of particles right through the formation of the first atoms and up to the formation of stars and beyond.

If you child is in the higher grades and struggling with these concepts then the booklets and poster might be worth a look. Even if your child is in middle grades the booklets would be a wonderful way to introduce some basic physics concepts and spur further inquiry and interest.

You can find the booklets and poster here.

Thanks to SIMON-THOMAS187, the Online Brand Manager at LEGO Education for the tip.