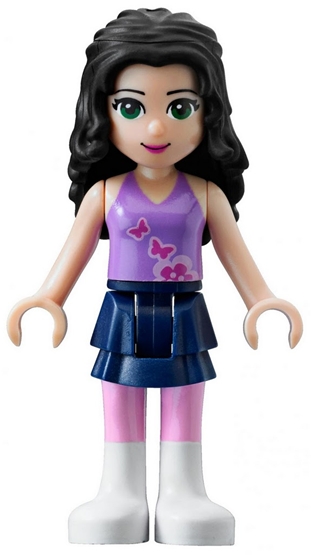 Lego Friends is a theme aimed primarily at girls and first appeared as a video game in 1999.

The sets are based on Lego figures that are taller than regular minifigures and include buildings and vehicles as well as animals and a number of unique accessories.

Lego Friends are available at Amazon.com

Lego Friends is the Lego Group’s latest  theme to appeal to girls within the company’s traditional range of brick-based toys.

While other attempts to engage the female market have involved Lego Jewelry or mosaic-type artwork, Lego Friends is a more traditional Lego play theme.

Replacing the Belville theme, which was a largely pink theme with both worldly and fantasy elements, the Lego Friends is built around a more subdued and diverse palette of colors, to reflect the varied and realistic characteristics of the characters.

The boxes for the first wave of sets (in April 2012) are purple and other colors featured in the sets include; violet, white, light pink, light blue, tan, orange and lime green.

The theme centers around a close-knit group of girls who each have unique personality traits and interests. Emma, Olivia, Stephanie, Mia, Andrea, Sarah and Marie have diverse talents including caring for animals, tinkering with cars and inventions, fashion design, music and singing, nature and beauty.

The characters take the form of molded figures roughly twice the size of regular Lego minifigures but all pieces are compatible with regular Lego and most of the elements can be used by regular minifigures.

The Lego Friends sets place emphasis on play and interaction between characters (hence the larger figures) and the sets have met with enthusiasm from both male and female members of the Lego Community.

Welcome to Heartlake City and the world of LEGO Friends, a brand new range of construction sets and exciting mini-dolls for girls who love to build and play.

Centered around a beautiful, heart-shaped lake in the foothills of the Clearspring Mountains, Heartlake City is an amazing place to live where there is always something cool happening. It’s also the home to five special girls. Though they are best friends, each has their own personality and different hobbies.Meet Mia, Emma, Andrea, Stephanie and Olivia, who hang out in the café, have barbecues in the backyard, go to the beauty parlour and play with their pets together. Mia loves animals, Emma lives for fashion, Andrea’s going to be a star, Stephanie throws the best parties and Olivia keeps them all organized.

Lego Friends – The Beauty Of Building