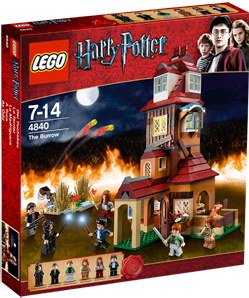 When Lego announced they were revisiting the popular Harry Potter licence in 2010, fans were eagerly guessing which set the company would make while adding input on their own desired sets.

One of those dream sets and without a doubt one of the most loved designs of the Harry Potter universe is the haphazard Weasley Family Home, lovingly known as the Burrow and its addition to the Lego universe in 2010 is well deserved.

One of the most notable features of set 4840 is the minifigures. The set comes with six minifigures and, at the time of release, five of those six are exclusive to this set. And what minifigures they are.

Bellatrix Lestrange, Voldemort’s favourite Death Eater (with hair to die for), Fenrir Greyback (also with hair to die for, but most of it on his chest!) and on the side of good first time appearances of Arthur and Molly Weasley as well as Ginny Weasley and a Harry Potter figure to round out the set. 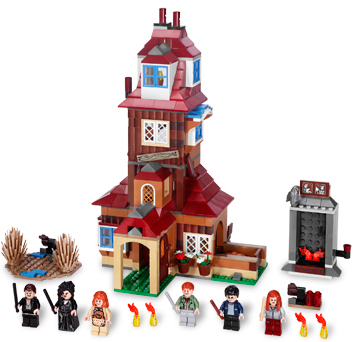 The figures themselves are absolutely stunning up close and Lego have gone to great lengths to make them instantly identifiable as their movie counterparts with torso, leg, hair and head-piece detail (both front and back). The bad guys look the part and are so full of detail (Bellatrix both front and back) and the Weasley family is as endearing as can be.

Ginny looks very cool, and I can imagine it was hard to capture her character in a minifig as the subtleties of her personality are hard to convey in a few line strokes but Lego have excelled here. Arthur Weasley looks great in an apple green jacket and Molly has beautiful designs on her apron which extend down to her legs. There is no Ron in the set which feels a little strange but I doubt too many fans will be complaining. There are also two of the new printed owls and a pig included.

The house itself is a fair miniaturized version of the Burrow. Though not quite accurate it captures the ramshackle feel of the Burrow very well and the whole thing looks like more rooms were added together haphazardly to accommodate more baby Weasleys as they came along. It is asymmetrical but Lego have managed to do all this without making it look like something Crookshanks coughed up. 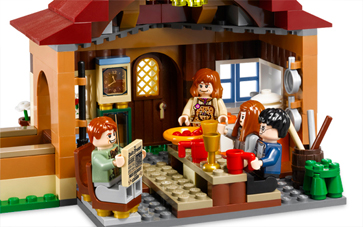 The colors tone in well to each other and the three-level building is made with a mixture of dark red, orangey brown, tan, white and blue. Lots of details distinguish this from other, more regular houses like 2010’s Apple Tree Cottage and there are too many to mention here. For AFOLs it should be noted there are a mix of printed and stickered pieces in the set.

The ground floor is a kitchen and living room area while the second floor is Ron’s bedroom (complete with bunks and a Chudley Cannons poster) while the top floor (really tiny!) is another bedroom.

Outside there is a pig pen, a fire place (complete with floo powder action!) as well as a swamp area where a battle between Bellatrix and Harry took place in the Half Blood Prince.

Overall this a set that fans of the films and books will appreciate while fans of Lego will love. Highly recommended!

Where To Purchase The Burrow