A few days ago I talked about the LEGO sales available at the June 2013 Toy Sales in MYER Australia Stores but as it is June, almost all department stores are also offering some interesting deals, including BIG W and Target. Strangely absent this year is Kmart which doesn’t seem to have any LEGO on offer.

UPDATE: A reader has let me know of another Kmart catalogue that includes LEGO – thanks Brett!

For complete coverage of the best deals for Australian LEGO fans check out our LEGO Australia page.

The deals overall are pretty good, though I notice while most stores have the new LEGO Lord of the Rings sets, none of them are offering the latest 2013 Star Wars sets. Which is a shame because I would have happily purchased a few of the larger sets from the mid-year wave if they were 20%-30% off. Hopefully they will be on sale later in the year.

I found sorting through the deals a little difficult but you can find the LEGO Big W Sales here and the Target Sales aren’t available yet but you can view the catalog here.

Some notable deals are:

You can find more deals at out LEGO Australia page and make sure to sign up for our LEGO Newsletter emails to keep up to date with the latest news and deals. 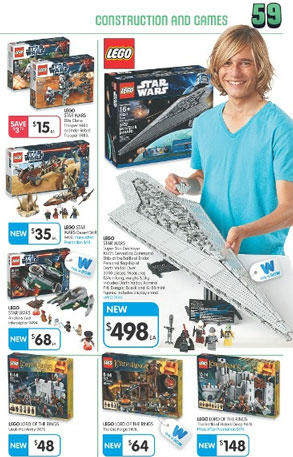