As the year draws to an end and we hear more about 2012 Lego Sets it is a good time to look back and see which Lego sets really stood out amongst the 450 or so sets released by Lego this year.

This retrospective is a work in progress and while this post addresses the Top 5 Ninjago sets of 2011, other articles will be forthcoming on the stand-out City, Star Wars, Kingdoms sets and those from other major Lego themes until eventually …
We will reveal the overall Top 5 Lego sets of 2011!

As The Brick Life is a site for parents it means we do things a little differently than many other Lego sites.

Parents want to encourage their kids to grow and learn while having fun with Lego. They also want to get the best value for money over time, so the focus of our decisions on what is “best” for our kids is geared towards those goals rather than what is “cool” or “collectable”.

The sets listed  in the Top 5 Lego Ninjago Setsfor 2011 reflect this site’s aim to highlight those Lego sets we think kids will love straight out of the box but that will also provide them with opportunities to continue enjoying the set/pieces/figures beyond the initial build.

So without any further ado…

The Ninjago Spinjitzu Dojo was fairly maligned when first released due to the “open” nature of the playset.

By that I mean it is more like a facade or a backdrop rather than an a fully fleshed out building.

From a collectors point of view this set is a little hollow and won’t really make a big impact on the secondary market in years to come. What it does have going for it is “playability”.

The Dojo is alot of fun and in terms of long term interest it contains a number of cool pieces that kids can use to build their own customized Dojos or Ninjago buildings.

Pieces such as the printed Japanese style “Screens”, the large brown doors and the red and black building highlights-the color scheme is gorgeous.

The Dojo comes with the white “Ice” Ninjago Zane and the fairly rare Sensei Wu as well as a skeleton bad-guy. There are traps like dropping axes and spinning swords and the front stage area explodes when you press a button.

Essentially it is a great set for building up a collection and really just sets the “Ninjago” mood more than a vehicle or spinner set can.

The Spinjitzu Dojo retails for $49.99 and is available at discount on Amazon with free shipping.

Kids love dragons –  a generalization I know but it ‘s true! Much like Dinosaurs, dragons universally appeal to kids and by incorporating the mythic winged animals into Ninjago sets, Lego has made it a much more interesting theme.

The Lego set Ice Dragon Attack was the first dragon to be released in the Ninjago theme and subsequent dragon releases have only strengthened the significance of this set.

The Ice Dragon is ridden by Zane, the Ice Ninjago and this set includes his DX version.

When the Ninjago Ninjas ride dragons they wear special uniforms and the figures are known as DX. It is a sign of experience and competency. It also looks very nice with golden dragon printing figure’s torso.

The dragon itself has a beautiful palette of white, light blue and orange. For kids that like to “fly” things around the house it is reasonably durable and all the folding hinges means it can pose in a range of different poses.

Overall this is a beautiful set and well worth the $19.99 price tag.

The Ice Dragon Attack Ninjago set is available at Amazon.

On size alone it can’t compete with the larger playsets or vehicles that impress with their sheer impressive bulk and variety of pieces.

However it has alot to offer and is a great set to pick up if kids are new to the theme, want something different to enhance their collection or are into the Ninjago weapons.

The small set comes in at only 45 pieces but comes with 1 spear, 2 daggers/knives, 1 bow and 1 katana.

Ninja Training Outpost also comes with the figure of Cole who is the Ninjago Ninja of Earth and who wears an impressive black uniform and a big scowl >:0(

The set is value for money and is a wonderful introduction to the theme. This is the kind of set I recommend for parents who want to see how their kids will respond to a theme if they are curious. It also can be added to a collection of generic Lego blocks and adds instant Ninjago action so kids can kick start their imagination.

The Lego Ninjago Ninja Training Outpost retails for $4.99 and is available at Amazon. 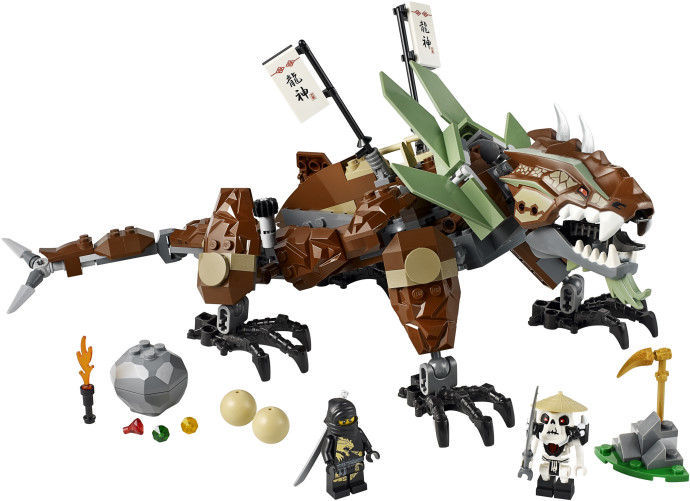 Another dragon, this time the Earth Dragon ridden by Cole, the black Ninjago with his DX Dragon riding uniform.

I like this set because it stands out in the Ninjago theme for the green/brown colors and it’s rather boulder-like appearance.

While most other sets have a red/orange color palette this dragon is heavily influenced by the earth in brown and green.

The Earth Dragon has no wings so is more equipped to scramble along the ground  or climb up steep cliffs with Cole securely seated on the back.

It’s legs have a high degree of mobility so can be posed in different ways and the dragon can even lie flat on the ground.

The Earth Dragon would make a good set to accompany a child’s Ninjago collection and it fits well with one of the other flying dragons like the Ice Dragon listed above or the Fire Dragon below.

A very cool set for an RRP or $34.99 the Earth Dragon Defence is available at Amazon with free shipping.

I love this set – The temple, the dragon, the figures. All beautifully designed.

It is large, colorful and great fun for kids. As of the time of writing it is also the largest Ninjago set released so far at 1180 pieces.

I talk about the Fire Temple with other people and sometimes I forget how the colors just seem to sing in this set.

The oranges, reds, blues and greens with highlights in black and tan. And then the design of the architecture- the Japanese stlye screens, the round red circle at the top, the way it sits on the blue of the river, etc, etc. I could go on and on :0)

I love the look of a well-designed Lego set.

But the Fire Temple is so much more than just looks. The set comes with seven minifigures including Sensei Wu and Lord Garmadon, the two brothers who ended up fighting each other for control of the Elements. You also get ninjas Zane, Kai, Nya (a girl Ninja, yay!) and two bad guys.

Then there is the dragon.

This articulation makes the dragons seem more real and allows kids to “get to know” them more (so to speak) and make them seem as if they have personalities.

The way that the dragon integrates with the temple is also amazing. All these factors contribute to the set’s awesomeness and this is why we think it is the best Lego Ninjago set for 2011.

You can read more about the Fire Temple via our Lego Ninjago page or go and check out more reviews at Amazon where the Fire temple is available for a discount price with free shipping. RRP is $119.99.

So that is our list of the best Ninjago sets for 2011.
What were your favorites?

Gallery Of the Top 5 Lego Ninjago Sets For 2011