As part of series of articles covering the Best Lego Sets of 2011, in this post we are going to reveal which five Lego Star Wars sets really stood out this year for their superior design and price point.

As The Brick Life is a site for parents who support their child’s Lego obsession (and maybe are even a little bit obsessed themselves!) we take into account a set’s play value for kids in both the short and long term as well as it’s value for money. 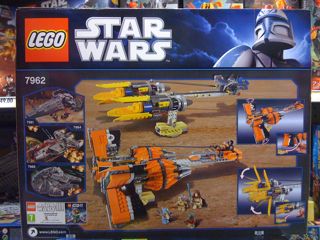 Lego released 28 Star Wars sets in 2011, more than any other theme apart from Ninjago.

In this article we will only be looking at the regular releases, those commonly found in department and toy stores and those of most interest to children and their parents.

Yes, yet another Jedi Starfighter.

Lego have released quite a number of the Jedi Starfighters over the last year or so, each with a different character. The great thing about this particular set is that it comes with some rather rare minifigures and three mini battle-droid vehicles as well as the main starfighter.

The Jedi starfighter obviously belongs to Mace Windu, a character who has more than a few fans but seems to be very hard to find.

His character lends a level of authority to the Star wars Clone Wars series, not to mention cultural diversity and it is a shame he is generally so hard to find in Lego Star Wars sets.

It is a well-rounded set which fans of the series will enjoy and I like the fact that each figure has a vehicle and aren’t left to stand around twiddling their lightsabers while the main character flies off into space.

Mace Windu’s starfighter set is a limited edition set so can be hard to track down. It retails for $39.99 and you can look for it at the Lego Shop at Home store or Amazon (This set tends to be expensive at Amazon).

The T-6 Jedi Shuttle has rather an unusual design that didn’t impress me immediately but now that I have had a chance to soak in the brilliance of the design I love it.

This set is aptly paired with the Bounty Hunter Assault Gunship which was released at the same time. The two just seem to go together, story-wise and color-wise but if I had to choose between the two I would prefer the T-6 for it’s nifty wing design and the versatile minifigures.

The minifigures of Anakin Skywalker and Obi-Wan Kenobi are rather common in Clone Wars Lego Sets but they are also two of the most popular and recurring characters in the series so it makes sense to feature them often. The relative “commonness” of these two figures is balanced by the exclusivity of the other two Jedi-Shaak Ti and Saesee Tiin who can’t be found in any other set.

The Jedi ship itself can be flown with wings set in a vertical or horizontal position, they rotate as one fixed structure, and the cockpit detaches to make an escape pod. It’s an ingenious design that works and the colors really set it off. Lots of fun :0)

The T-6 Jedi Shuttle retails for $59.99 which is a little expensive so see if you can find it on discount. The set is available at Amazon with free shipping. 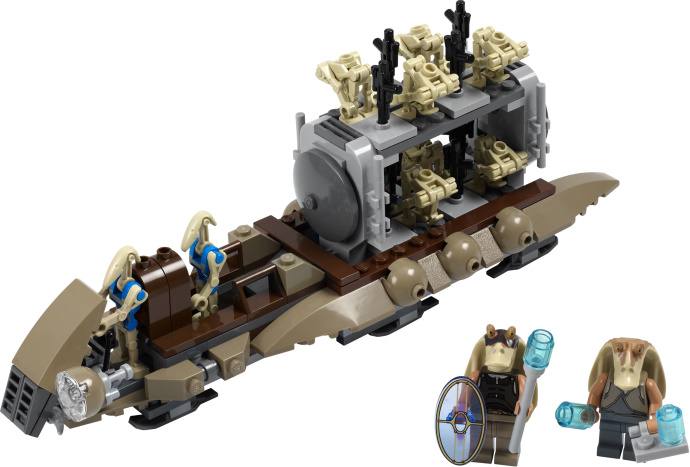 I bought this set for my son for his birthday recently. He’s been coveting the long out of stock MTT which he confessed to me he wanted because of  the sheer number of battle droids that came with that large model.

Considering this small set (at a fraction of the price) comes with 10 battle droids I figured he would be pleased (and he was).

The main vehicle in the set, a droid transport (in a nice palette of brown, gray and khaki) carries 8 of the regular battle droids while the two blue droid pilots stand at the front. The transport slides along carpet easily as it has round pieces stuck underneath, and makes the ship appear to “glide” when pushed.

The Battle Of Naboo set also comes with two newly designed Gungans; Jar Jar Binks (love him or hate him) and a generic Gungan soldier (both exclusive to the set). The Gungan soldier carries a beautiful transparent purple energy shield which is one of the nicest pieces of Lego I have seen in a long time.

It is a small set but comes with lots of figures and a well designed vehicle so worth the $24.99 price tag (though if you can find it for less it would be preferable). The Battle of Naboo set can be found at Amazon with free shipping.

If you read my review on this set (it’s ok if you haven’t I won’t hold it against you but you can read it here if you want) you will know that it took a while for this ship to really impress me (I was averse to the “Grayness”).

However eventually I “gave into the gray”, and I can’t imagine how I didn’t like it before.

The Republic Frigate is one of the larger sets released this year and as a full disclaimer I should confess that I love big Lego sets and the number two spot for Best Star Wars Lego set of 2011 was a tough choice between the Frigate and another large set, Anakin and Sebulba’s Podracer set (which also had the added appeal of diverse colors!) but in the end I chose the Frigate because of the range of play options.

But consider the Podracer set part of the list too – Ok now I’m cheating!

The Frigate is a large ship that can be played with. Unlike other larger ships in the Star Wars Lego universe the Frigate comes with a handle that can be used to easily pick it up and then fly it around the room without disturbing any of the pieces.

The Frigate also comes with areas you can open up to play inside the ship and a number of exclusive figures. It is also a very handsome looking ship that would look great on a display shelf when not being flown around the house.

The Republic Frigate is my son’s Christmas present this year (Luckily he doesn’t read this blog!) and I know he will love it as much as I do. You can purchase the set at Amazon who offer a good discount and free shipping on this large box.

Did I mention I have a bias for large Lego sets? Then I suppose I should also mention I am Star Wars movie fan from the 1980s :0)

The Lego Millennium Falcon is not only the most mis-spelled Star Wars Lego set it is also the set that has been re-made more than any other.

There have been three “system” Lego Millennium Falcons and numerous other versions; from tiny keyrings to huge limited edition collectable models that now demand over $1500 on ebay.

But the system sets of this iconic ship are always in demand and I feel blessed that Lego sees fit to re-design and re-release them every few years.

This latest version is a beautiful ship and a wonderful playset.

The outside detailing looks fantastic and is instantly recognizable. The interior is the most well-designed of any version of the Falcon (the large collectable one included) and really adds to the fun kids experience with this set-it even has a bed! Having said that, the ship can also be customized inside with extra modifications if a child is interested in doing so.

The figures are diverse, suit the ship well and there are a number of new versions of familiar characters.

It is a fun set, both to fly around as it is quite sturdy and also to use as a playset while stationary.

All sound reasons why it sits at the very top of our list of the Top 5 Lego Star wars sets for 2011.

You can read our review of the Falcon here or find the Lego Millennium Falcon at Amazon with Free Shipping.

If you enjoyed this article check out our Top 5 Ninjago Lego Sets for 2011 and stay tuned (or subscribe to our newsletter) for more Top 5 Best Lego Sets of 2011 Lists.