If your child is a mad keen Lego fan then chances are they have created hundreds of Lego models.

Invariably these amazing creations are admired by family or friends, photographs are taken and then the models end up being disassembled and made into something else.

My son creates new Lego Models all the time.

I have taken photographs of his numerous masterpieces and collected them on my hard drive. There they can be shared by email with interested friends or family, who offer kind words of praise.

This is a wonderful experience for my son, but I also want him to be able to share his creations with like-minded Lego fans further afield – Those who can truly appreciate the amount of effort he puts into each and every creation.

These are people that he may not know and might never meet but they are fellow Lego creators who can marvel at the way he mixes pieces and colors or who can commend him for the amount of detail he has put into the “greebling” on his starship. They can also offer constructive advice as to how his models can be improved and enhanced by certain pieces or techniques.

I am a believer in the theory that we learn and grow as a community.

I know there are people out there who care about Lego as much as he does and would want to see him grow in his ability to express with Lego, the visions of grandeur he creates in his mind.

To allow my son to share and grow in this way, as a parent I needed to get past my fear of Cyber-Bullying and Internet-Predators and find a way for my son to share his creations on the Internet.

Here are some resources Lego fans use to share their Lego creations on the web.

The most well known photo sharing site on the web has a strong Lego presence.

Registration is free and simply requires a Yahoo account.

It is easy to get lost in the sheer number of photographs and accounts. Flickr is also used by many people for many types of photographs so if your child goes wandering there is no telling what kind of content they may end up seeing.

Another downside is the lack of customization. Kids who are already drawn to Lego are drawn to visuals. They delight in the way things look, and often take great delight in tweaking colors and overall look their creations, be it Lego, their room or their homework assignment.

The problem is you can’t do that with Flickr. All personal pages are the same color-white. Lego kids might soon lose interest in the generic “whiteness” of the site. Its seems a small thing but I know it would bug my son.

The sheer number of Lego creations on the site means there will be something your child will resonate with and that will inspire them to new heights. Groups like the The Brothers Brick Flickr Group which collate mind-blowing Lego creations from around the world are one reason to stop by Flickr and may perhaps even encourage your child to make a contribution.

If Flickr isn’t your thing, there are other options.

MOC stands for My Own Creation and is a term used often in the world of fan-designed Lego models.

Many people who are respected and revered for their original Lego creations will post on Flickr and MOC Pages so you won’t miss out on the best models if your child only registers with MOCPages.

MOCPages has the same facilities as Flickr; people can upload images, comment on other people’s creations, create and join groups on various Lego themes and more.

All comments are moderated both by software and a human so there is less likelihood of bullying or rude language.

You can also customize the color and style of your pages-its a small thing I know but important to future-design-gurus :0)

I really like MOCPages, it has a wonderful feel to it, and I like the total Lego focus.

I don’t have to worry he will press a button and end up staring at something that will give him nightmares for weeks or cause him to wonder what part of the human body he is looking at.

My son likes the site as well. I would recommend you take a look at it first, then with your child and monitor the account for a few weeks until you feel comfortable.

Build Your Own Lego Site 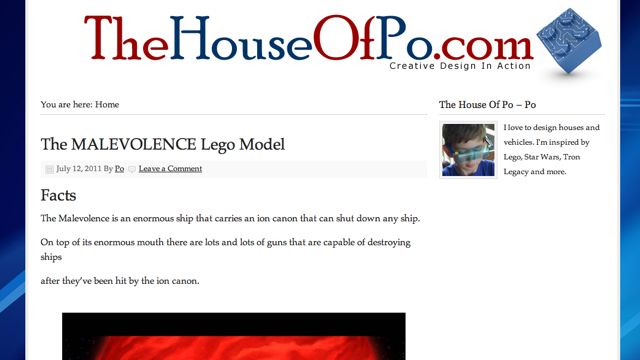 The third option is a little more complicated but it gives you the most power to control what goes on.

Perhaps its the web-goddess in me but I have created a site for my son to share his Lego creations.

We haven’t updated it in a while due to school commitments but in the holidays I will be teaching him how to make updates himself.

If you want your own site you can create a free Blogger or WordPress hosted site or you can even self-host your own site with a domain name your child has chosen for themselves.

A child’s own website site is something you can monitor and control easily.

Your child can dabble in website design and modify everything to look exactly the way they want while you can moderate the comments that are made and what information you choose to share.

Getting traffic to view the website is harder to achieve than Flickr or MOCPages as these sites already have a built in audience who connect with each other easily. Not many people will find my son’s site by using a search engine.

However, I like the idea of my son having a “portfolio” of his work to show people and that is the reason we made the site. He also likes having his own “domain”, named after him and of his own design to showcase his Lego and other interests. Its nice to think that over the years he can look back through the site and see his past creations.

Having said all that, I also like MOCPages as he can share his work with a wider community and get some constructive feedback and support.

Together, the website and MOCPages provide a wonderful way for my son to allow his love of Lego to grow into the wider world.