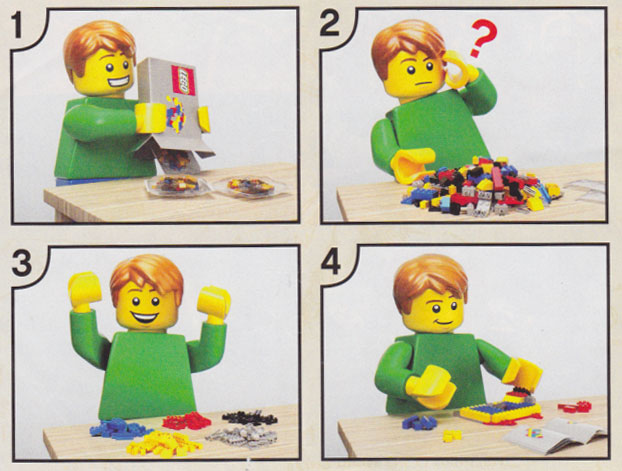 The Lego Adventure Book by Megan Rothrock, a former set designer for Lego, is a beautiful book that is a cross between an instruction book, a story book and a comic book – A perfect pitch for kids who love Lego, love building and love reading.

Kids are instantly drawn to books like this. The images are bright and vibrant, and there are heaps of them! When you add extras like the hundreds of ideas and instructions included as part of the story, you create a purchase that will earn it’s initial cost over and over again.

The book clearly reminds me of Lego Idea books I had as a child – here is an 1980’s sample, inexpensive magazine style books that told a story of a couple building a home then setting off to the moon (as you do) through building instructions and original design ideas with basic Lego pieces. Megan has just taken that idea and amped it up. Stickers would have been an awesome addition but I guess we always have Brickstix 🙂

The Lego Adventure Book is a double bonus for parents because in addition to occupying them for hours (more like weeks!), the book welcomes kids who struggle with reading. The comic book format provides a wonderful way for them to engage with books without becoming overwhelmed by large tracts of prose. Kids can read at their own pace but also keep up with the story via the images and word balloons (one of the many reasons my house is full of comics).

To be honest the best way to explain The Lego Adventure Book to you is via pictures. The publishers and staff at No Starch Press were kind enough to send us some (thanks guys!).

The LEGO Adventure Book is a heavily-illustrated, colorful book of LEGO ideas and building guides for fans at almost any age.

Chock-full of inspiration, model ideas, and (of course!) building instructions, the book guides you through many exciting LEGO theme worlds, like outer-space, medieval times, the wild west, and Roman cities.

Each stop along the way showcases incredible builds by well-known members of the LEGO community and includes photographic step-by-step building instructions for automobiles, spaceships, castles, and more.

Megan Rothrock is a former set designer for the LEGO Group. Her models have been displayed at LEGO events across Europe and have been featured at the San Diego Comic-Con. Rothrock enjoys attending LEGO fan events and meeting fans. Her greatest wish is to inspire the LEGO Builders of tomorrow. She works as a freelance toy designer and currently lives in Denmark.