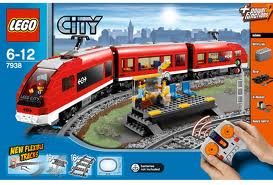 Amazon UK currently has the Lego City passenger Train on a steep discount of 42% off, bringing the price down to £59.98 + Shipping.

If you are into trains then also consider the Flexible tracks (7499) and Train Station (7937) which are also discounted and will help bring down the cost per item in shipping charges.

All aboard the new high-speed passenger train!

The new high-speed passenger train is faster than a speeding bullet and it’s on-track to super-speed passengers to their destinations! This train can handle up to eight cars at a time through the tight curves of the new flexible tracks using the new 4-channel, 7-speed infrared remote control. Train features an engine with opening cockpit and 2 passenger cars with removable roofs and space for 10 passengers. Includes 3 minifigures: train driver and 2 passengers; plus 1 traffic light, train station, 16 curved track pieces and 16 flexible track pieces that can make a curve or straightway.

Lego recently revealed a new Lego Red Cargo Train 3677 which is a beautiful addition to the popular City sub-theme, Lego Trains and their second cargo train in just over a year.

The Lego Cargo Trains are a perennially popular part of the Lego City theme because they combine remote control power with the awesomeness of trains and add extra playability with trucks and cargo elements.

Kids love to make these trains a part of their cities and harbors because they provide so many opportunities for creative play.

Dont’ miss this one!

“Prepare the cargo train for its next destination!

The LEGO City freight yard is busier than ever! Get the Red Cargo Train ready to roll out and haul! Load rocks into the freight cars with the conveyor belt and be careful when loading the hazardous waste car. Use the flatbed utility freight car and railroad repair truck to repair the tracks. Then drive your haul through LEGO City with the LEGO Power Functions Remote Control #8879! Loaded with details and accessories including 3 freight cars, engine car, broom, shovel, jackhammer and 40 tracks.